This blog post originally started out with the intention of revealing the interior of the greenhouse but as I was digging back through my mountains of photos squirrel! 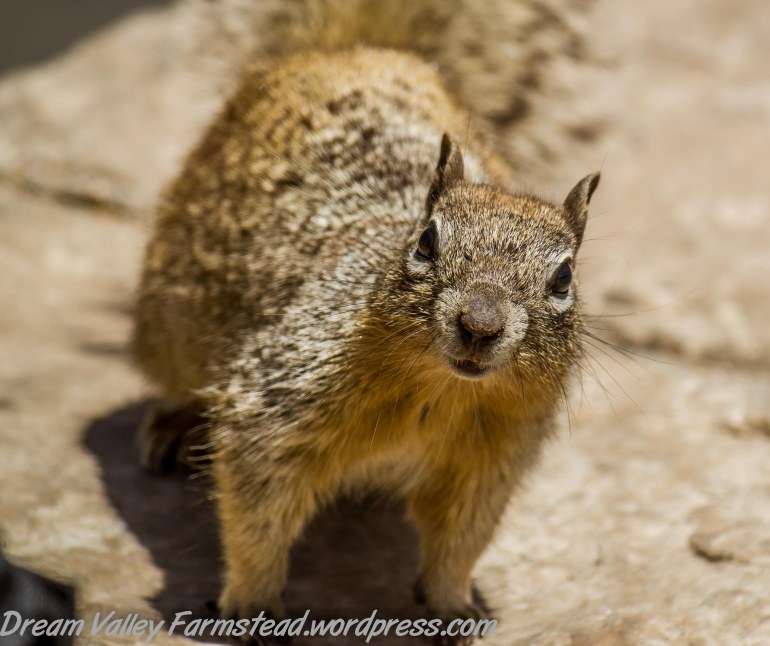 If you’ve ever watched the animated movie ‘Up’ then you know exactly what that means.  If not, well, it refers to a pack of dogs that are easily distracted by a squirrel and stop mid-sentence (again, you’ll have to watch the movie!) and say ‘squirrel’.

So, as I was saying… I was looking through my mountains of images for photos of the progression of the greenhouse and all the work that was involved when I ran into a glitch and was getting an error message that my program couldn’t find the image.  sigh.  I know you don’t really have a clue what I’m talking about but, as I was searching for the correct catalog and files I came across some photos I had taken several years ago when we were traveling and working out West.

In fact, the above photo of the squirrel was taken when we visited the Grand Canyon.   I won’t bore you with a bunch of pictures but here’s one of my favorite shots of the canyon showcasing the Colorado River…

CountryBoy and I had the privilege of swimming in the Colorado River several times when we were in Nevada.  The water is crystal clear and was a much-needed relief from the triple-digit weather in the summer months.

CountryBoy’s trade as a Millwright allowed us the opportunity to travel and work.  We traveled for three years working and saving money to buy what is now Dream Valley Farmstead.  Most of our three years was spent in Idaho, Nevada, and Arizona with the last job being in Texas which is where we were working when we saw our future farm for sale on the Internet.

He worked ten or twelve hour days, six sometimes seven days a week but when he had some time off or was in between jobs we got to do some sight-seeing which we loved.

One of those off-times we headed to Yellowstone and the Tetons.

It was a dreary day when we were there but I think it just adds to the ‘Wow’ factor of the Grand Tetons. 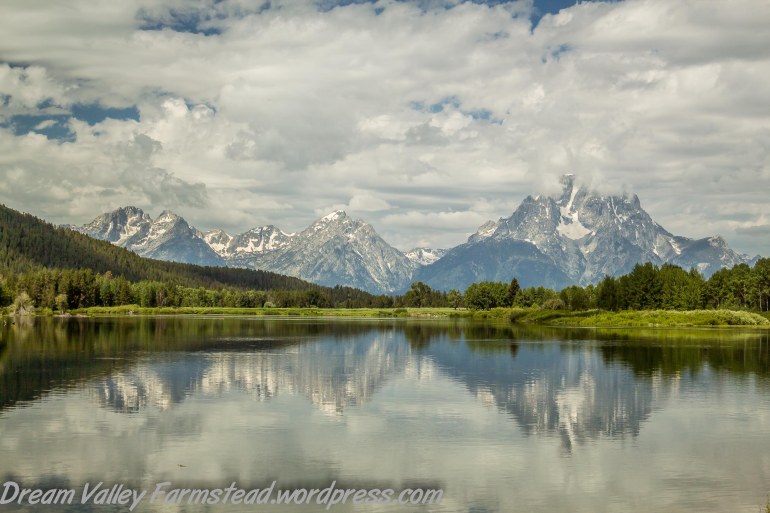 The green grass, trees and water was a nice reprieve from the Mojave Dessert where our fifth wheel was parked in Nevada.

In some ways we miss our traveling days but we traveled to fulfill a dream and along the way we reaped the benefits of seeing some beautiful countryside.

Now we live in our own little piece of beautiful countryside and we couldn’t be happier!

We are slowly reclaiming our rundown farm, meeting awesome people and making ourselves right at home here in the Appalachians.

Speaking of meeting people, I met a sweet lady at the Farmer’s Market last summer where we both were vendors.  She reads this here little blog o’ mine and, come to find out, she is the editor of our local newspaper and, (here’s the ‘some news’ part of this blog post) she has asked if I would write a column for the Citizens Voice & Times!  What?!  I’ve never, in my fifty some years of life, done anything like this before but, I said I’d give it a go since the subject of the column will be very similar to my blog.  Now to try and get that first article written and have a decent head shot of me taken.  I think the head shot will be the hardest of the two since I’d rather be BEHIND the camera as you witnessed in the above photos.  Not in front of it!  But, besides the photo-of-me-bit, I’m very excited about this opportunity and am looking forward to growing as a writer and seeing where it may lead.