I’m sitting on the front porch this evening after a long, productive day.

Last night I had made up my mind to finally tackle the only two drywall walls downstairs today.  I have procrastinated long enough.  After all, three years is long enough, right?!

I dreaded getting started on them because I knew it would be a lot of work.  Lots of prep work and then several coats of paint to get good coverage.

Here’s one of the walls before I painted… 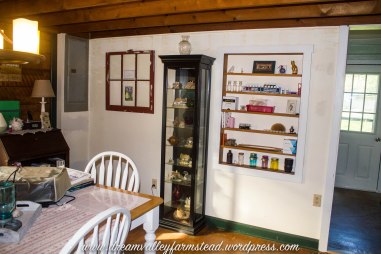 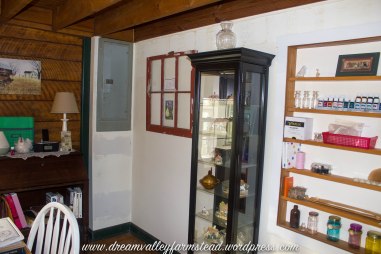 This wall is in our dining room and took most of the morning to prep.  It’s hard to tell in the photos but this wall was not appealing especially in a dining room.

There was a wallpaper border at the top of the wall that I had removed some time ago but did not take the time, then, to remove the remaining paste.  I spent a good amount of time this morning scrubbing and removing the paste and then giving the wall a thorough washing.

There were holes in the wall below the electrical box when we moved in that we repaired with new drywall.  The repair was done three years ago and the drywall was still bare!

Last, but not least, was scrubbing the baseboards and putting down some painters tape.

Here are the after photos… 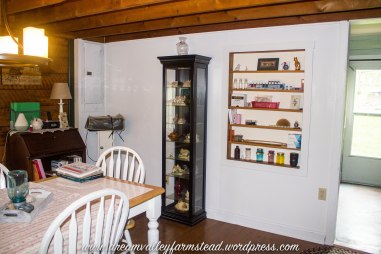 It looks much the same except the hunter green baseboards are now a crisp white, the drywall patches are concealed and it just looks fresh and clean. The electrical box needs  to dry completely then I’ll paint another coat (or two) to help hide it and I am still deciding what to hang on the wall.

The other drywall wall that needed some TLC was the stair wall which is across from the fireplace.

Here’s a before photo… 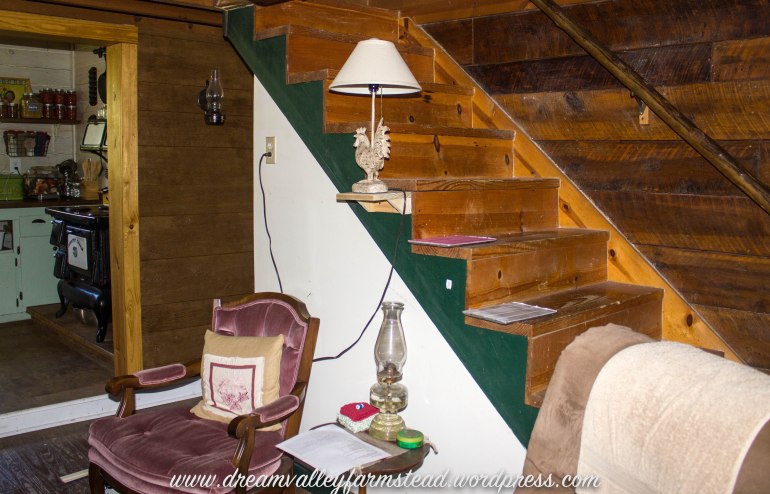 This is our winter setup.  We basically live in this spot directly in front of the fireplace during the winter months so I move our chairs here.

There is very little natural light in this area so I wanted everything to be white to help brighten the space.

It’s amazing what a fresh coat of white paint will do!

LizzieBelle is, apparently, not impressed and heading up the stairs to her other bed!

There are still tons of hunter green baseboard to tackle but that’s another day. or days. 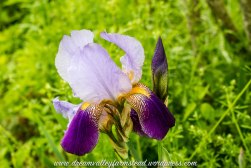 The yellow irises are beginning to open up and I just had to get another shot of the purple iris.  I have no idea what the white powder puff flowers are but they’re pretty cool.

While I was meandering, CountryBoy was raking up some fresh cut grass for the chicken coop… 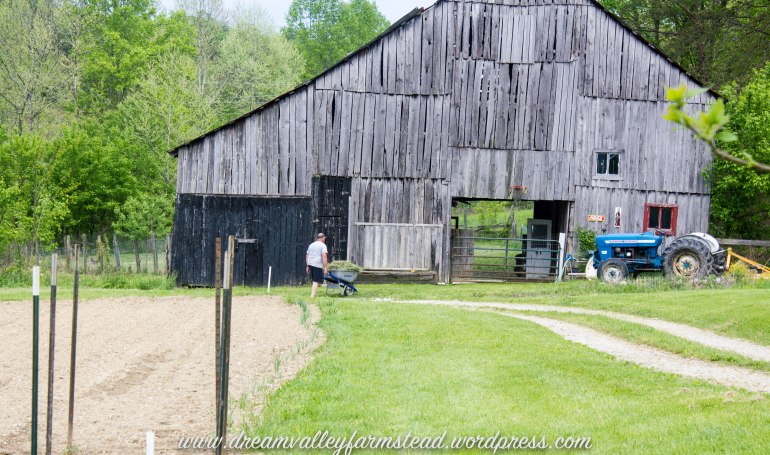 He stayed busy today working on the mower, mowing the paddock, bush hogging and tons of other stuff.  You’da thought I had the vacuum cleaner going all day.  He disappears quick when I pull that thing out of the closet, ha!  But, it was a gorgeous and perfect day to be working outside and that’s what he did.

Another few items that got a face lift today were some Ball jars that we were given some time ago.  Last summer I pulled out the fairly clean ones to sterilize and use immediately and I left the others in the box because they were really dirty and I wasn’t sure it was worth my time to clean them up…

Can you see the two different logos?  The middle jar does not have a line under the Ball name and is the jar from 1923-1933.  The others are from 1933-1962.  I plan on using these for cut flowers or storage.  Now to dig through the other jars and see what’s there!