It’s only two days into January and what a year it’s been already.

I had to work for a few hours yesterday morning and on my way out of the driveway I noticed that someone had run or slid into our mailbox.  It was spun around and facing the wrong way and it was dented up pretty bad.

On my way home I saw the stray cat that we have been feeding at the end of our neighbors driveway.  (We believe it was an offspring of a stray cat that we brought with us from Texas but had drowned in another neighbors pool.)  It was caught in a small trap and dead.  As upset as I was at the news of the drowning I know it was an accident.  But this.  This intentional cruelty has me outraged.  This is not the first time this neighbor has trapped and killed an innocent animal, even neighbors pets.  Trust me when I say I had to do some praying last night because, in all honesty, I want to ring his neck and wish bad things upon him.

Then, last night, CountryBoy woke up in the middle night to find our water pipes were frozen.  We’ve had a week of below freezing temperatures but it was minus two when we got up today and it was just too much for our pipes.

It is after noon, the sun is shining and we are still without water.  And, from the looks of the forecast we won’t get above freezing until Sunday.  We are praying that none of the pipes burst.  sigh.

Thankfully, the outside water faucet in front of the house is operable.  (Whoever came up with these non-freezing, upright faucets is a genius!)  We are able to get water to boil and wash dishes with and flush the toilet.

I had plans to start a painting project today but without water to clean the brushes it has been put on hold.  Also on my to-do list for the day was to clean the paste residue from a wallpaper border I removed in the dining room.  That will also have to wait until we have water.  So, instead, I will go upstairs and see what project I can work on in my sewing room.  There are plenty!

My plans of not tackling anything major this year was short-lived.

With the major freezing of our pipes this year it has become apparent that we must tackle this problem sooner rather than later.  We were hoping for later because of the cost that will be involved.

It’s become obvious that all of our water lines need to be in the house and not underneath.  (They currently run from the hot water heater – underneath the pantry in the crawl space – up into the walls of the pantry and into the walls behind the stove and kitchen sink.)  We have come up with a plan that will involve closing in the cistern room (an open space that flanks both the previously mentioned kitchen and pantry walls), relocating the hot water heater and all the plumbing and electric into the newly enclosed and insulated cistern room.  We will then add a small door or just leave an opening from the pantry into the new room.

It’s a big job, a big expense, and a big mess that we really didn’t want this year.  Maybe I should start a GoFundMe site.  Ha!  We know, in the long run, this will give us peace of mind during the frigid days of winter as well as giving us some much more needed pantry and storage space for the canned goods and even the empty jars.  It’s just that hurdle of getting started.  And dreading the mess!

Those of you that have been reading my blog for a while know that my posts are usually chock full of photos but yesterday’s post had none.  My Uncle asked where the light dusting of snow picture was?!  Well, I rushed off to work yesterday and did not take one.  So, I took one of what is left of the light dusting since the content of this post is not photo worthy. 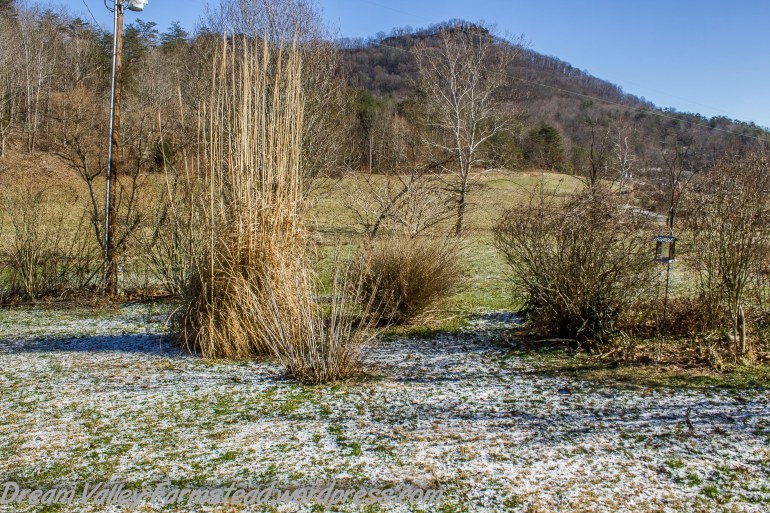 We only had about an inch of accumulation so much of it has already disappeared.

See the bird feeder?  There is a constant swarm of birds on it making it difficult to keep it full.  In fact, it’s empty again!

I trust y’all are having a much better start to the new year.  My apologies for the nature of this post but I promised transparency to you, our readers, and not to glorify our farmsteading life in a 100 year old farmhouse.  However, we are grateful for our health, a roof over our heads, food in our bellies and for being (somewhat) warm on these bitter cold days.  It’s all good!

Now it’s time to fill the bird feeder then head upstairs to the sewing room.  Toodles!