A week ago today, CountryBoy and I drove 2 1/2 hours one way to pick up my bees.

The place was busier than a beehive.  Seriously!  People were buying beekeeping supplies, picking up bees and basically buzzing around the store front like a bunch of busy bees!

Me?  I was taking it all in.  Not having a clue about what was going on or what I was about to get myself into. hahaha!

I watched the continuously looping video on how to install the bees into their new hive making mental notes and I bought a pair of extra small vented cowhide gloves that actually fit me, a beekeeping logbook and a t-shirt.

Then it was time to drive around the building to pick up my 3 lbs. of bees.

The lady checked my order, went and got my package of bees, checked the queen and then loaded them into the truck (behind CountryBoy’s seat!).

It was mid-afternoon by the time we got back home so I decided to wait until late in the evening to do the installation in hopes that they would be calm and ready for ‘bed’.

I donned my new gloves, gave CountryBoy the large gloves that came in the beginner’s beekeeping kit as well as the hat and veil (I did not want him to possibly have a bad experience right off the bat) and we went about the installation process. 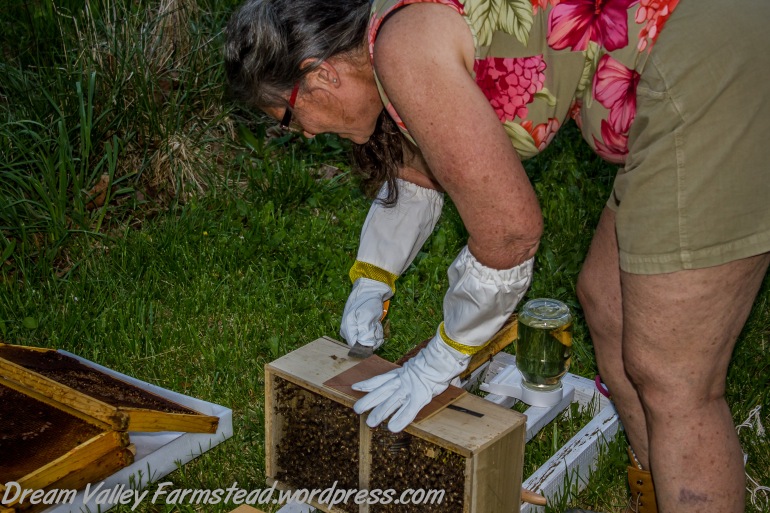 You can see in the bottom left of the photo several of the frames that I had already removed to allow room to ‘pour’ the bees.

If you look closely towards the left of the box you’ll notice a bee with a yellow mark on it.  That’s the queen.

I removed the cork on one end of the box where there is a ‘candy’ like substance that the bees are supposed to eat through to free her.  I then poked the end of a paperclip in the other cork at the opposite end and it pushed into the box itself.  Oops!  I was going to use this cork to ‘hang’ the box on one of the frames until she was freed.  So, I ended up sticking the paperclip into the ‘candy’, hung it on a frame then started ‘pouring’ the bees into the hive and hoped this was going to be OK and that the queen could still get out. 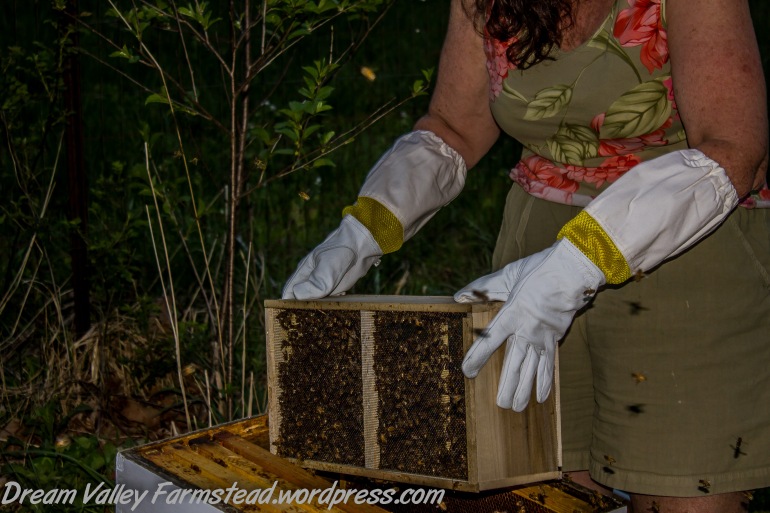 I was fairly calm and relaxed throughout the whole process but it was a little nerve-wracking hearing the loud hum of the bees and seeing them flying all over the place.

There were quite a few bees that didn’t ‘pour’ out so after several failed attempts to get them out I decided I would leave them be and started putting the frames back in so I could close up the hive. 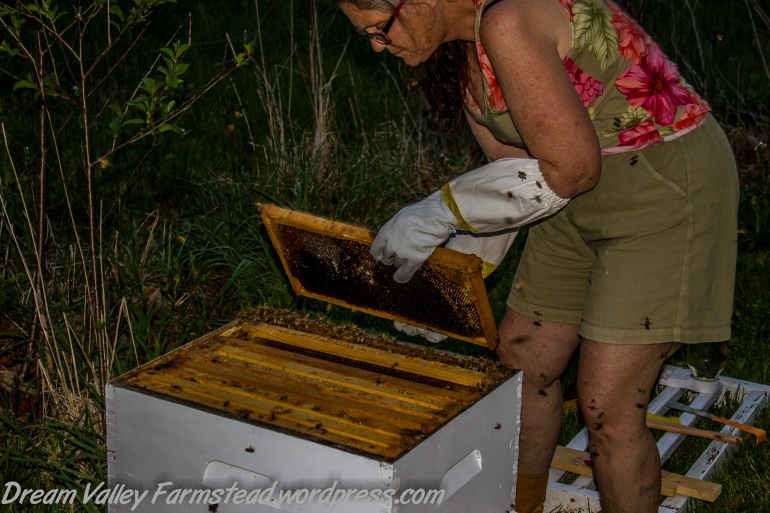 I left the package of remaining bees in front of the hive so they could come out at their leisure. 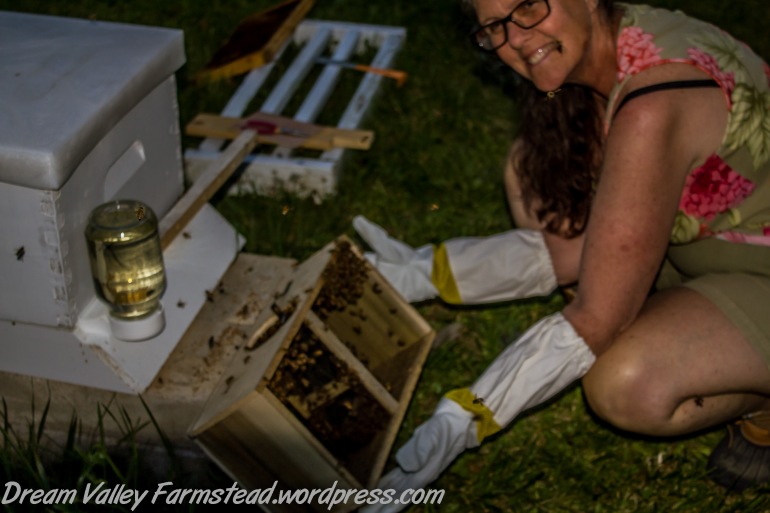 CountryBoy took the historical photos and lent a helping hand here and there.  He actually enjoyed the process for which I am thankful!  I’m sure I will need his help pulling the frames filled with honey as they can be quite heavy.

Last Wednesday we were working on the never-ending porch project (smirk) when I noticed a vast amount of butterflies everywhere.  It was beautiful!

For some reason, several of them were ‘clumping’ in this one spot on the driveway.  I couldn’t see anything that would attract them but they stayed there for quite some time.  Long enough, even, for me to go back in the house, slip my shoes off, go up the stairs to grab my camera, slip my shoes back on and then back outside.

I could not choose a favorite so I will bombard you with several similar shots of the butterfly clump! 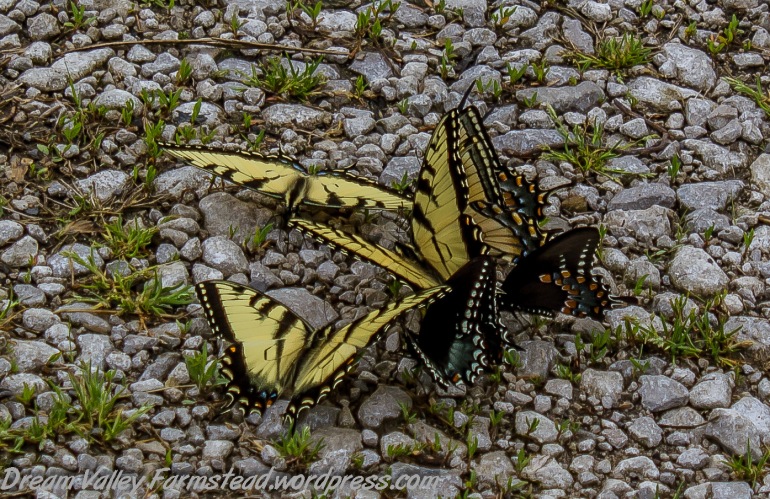 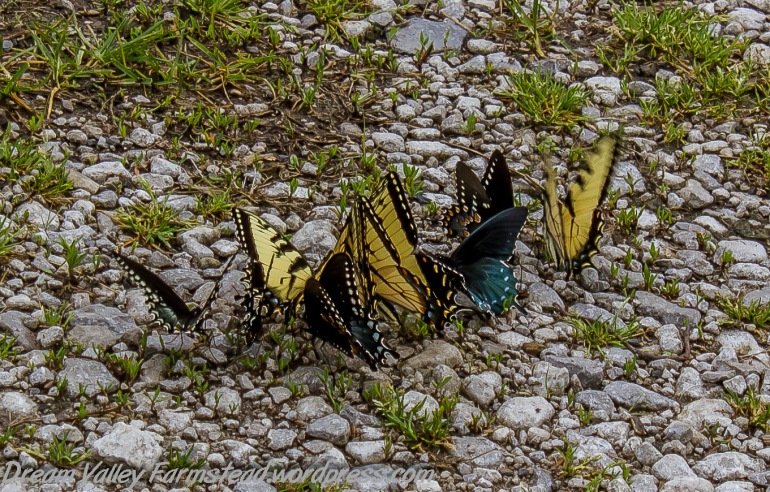 Isn’t that cool?  Butterflies were coming and going while I was taking the photos.  So pretty!

There ya have it.  Lots of stuff happening at the farm this month, another being picking up sixteen chicks at the post office yesterday morning.  Stay tuned for some cuteness overload!