We have been in the farmhouse for a year and a half now.  I know, right?!  Where did the time go?

Anyhoo, during that year and a half I had turned a blind eye to our one and only bathroom because, well, it was gross.  Clean, but gross, if that makes any sense!  I mean, I would clean the toilet, sink, tub, etc. but… it was just ick, cosmetically speaking.

I had hoped that we would be able to add the half bath upstairs shortly after moving in but too many other things needed our attention first.  So, my hopes of the upstairs half bath being done went out the window. We were now short of m&m’s.  M&m’s?  Yep, money and manpower, ha!

After acknowledging our m&m shortage I decided I needed to do SOMETHING to the bathroom.  I mean, it was time.  My blind eye was gone and I could no longer ignore it. Or maybe it was because I got glasses and could really see it now, ha!  But, nonetheless, it IS currently part of the pantry and the laundry nook and something needed to be done.

Here, let me show you and tell me what you think…

The wallpaper border was half on half off.  I’m not really sure why it was like that but it’s been that way since we moved in.

The walls were stained yellow.  I won’t say anymore about that but every room in the house has been like that. 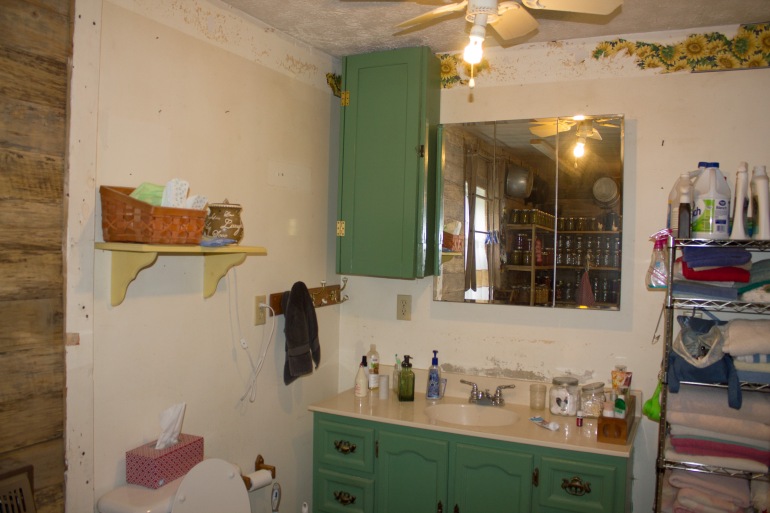 The existing shelves, hooks, cabinet… just wasn’t working out in there current positions.  (See my beautiful pantry in the mirror?!  And then you see the bathroom.  ugh. Especially if you look up.  YIKES!!!

The fan didn’t even work.  THAT definitely had to go. eeeyyyuuu.

And this is what you saw when brushing your teeth…

when you’re in the shower (and yes, you showered with the towels)… 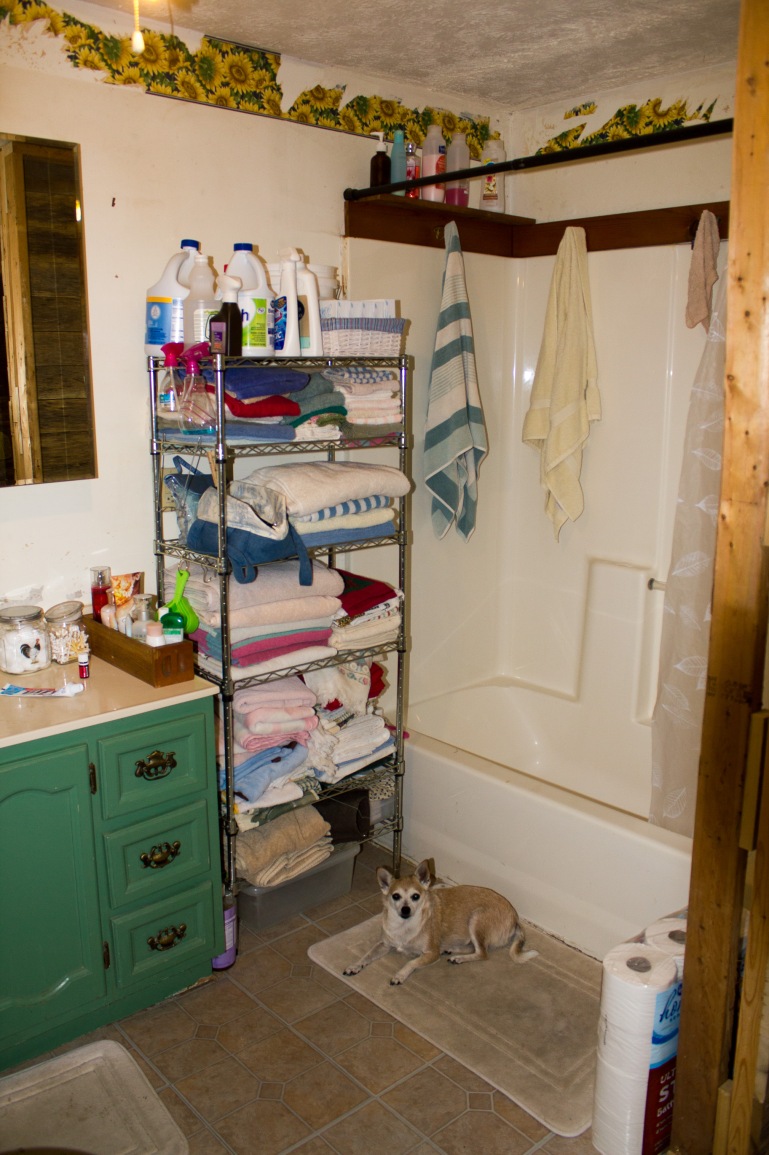 And although she purdied up the bathroom she’s not in there very much so it was time to do something.  I had reached my limit of turning a blind eye.

So, I thought I’d do a simple bathroom project that would only take a couple of days and would be cheap.

The cheap part turned out great but the simple and few days part? Yea, not so much!

I started by removing what was left of the wallpaper border.

And that is when simple went out the window.

The border came off fairly easily but so did the paint.  Right down to the bare drywall.  sigh.

So now I had to remove ALL the paint because new paint over existing paint in some spots and bare drywall in others just wouldn’t work out without being noticeable or causing problems in the future.

It actually started out being kind of fun.  It was like peeling sunburned skin!  You know, when you try to see how big a sheet you can peel off before it tears?  OK, maybe that’s a Florida thing, ha!

Anyhoo, this is what I was left with…

And holes.  Big holes from the shelves and cabinet.  And torn drywall. 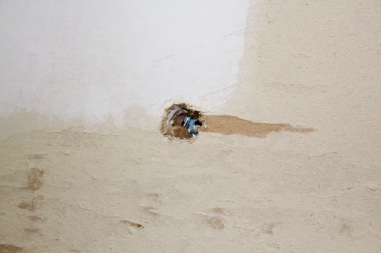 So, I smeared drywall mud over the tears and filled all the holes and waited for it to dry then sanded it all down.

Now I could get back to my simple bathroom project.

I picked up a can of white paint & primer for $15 and went to work painting the walls.

Then it was on to the accessories.  Since none of the existing shelves or hooks matched and I needed to reuse them I decided to paint them all white.  I also spray painted over the gold hooks and gave the ceramic knobs a thorough cleaning. 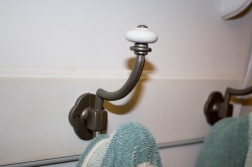 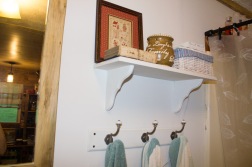 Since our budget was slim I asked CountryBoy if he would make a frame for the three pieces of mirror that had made up an unsalvageable medicine cabinet as well as adding trim around the ceiling.  They turned out great and no more icky medicine cabinet!

So, without further ado, let me show you our simple but clean and  crisp bathroom… 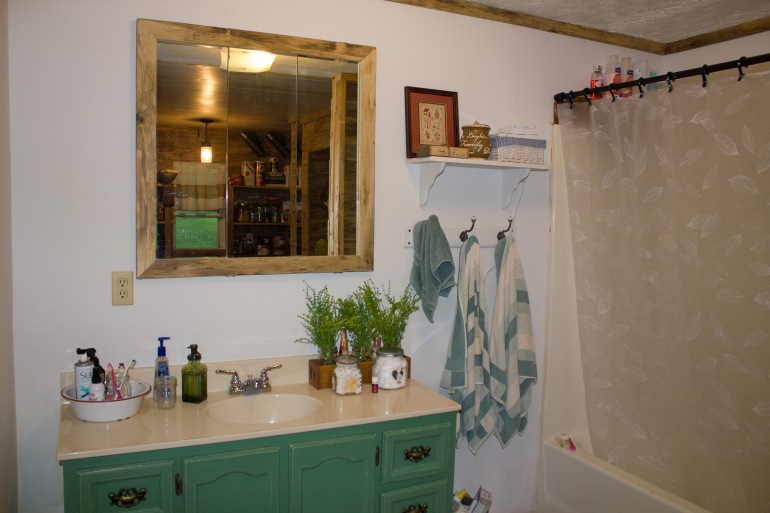 TADA!  Much better don’t ya think?!

Let me show you around. 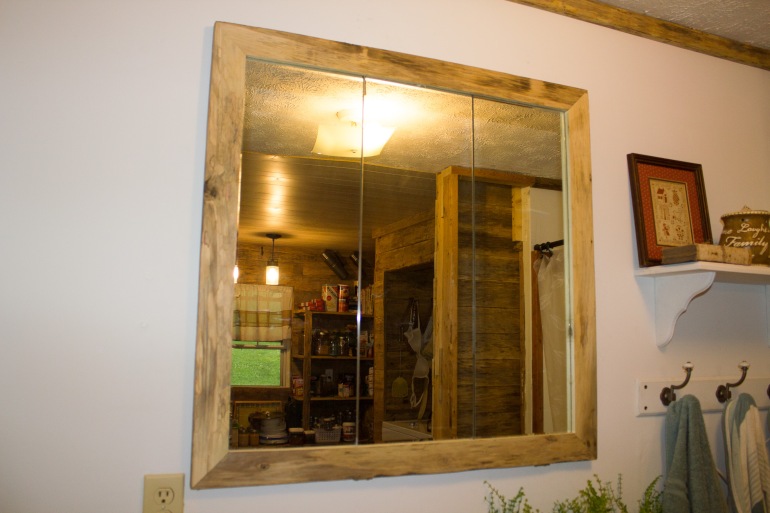 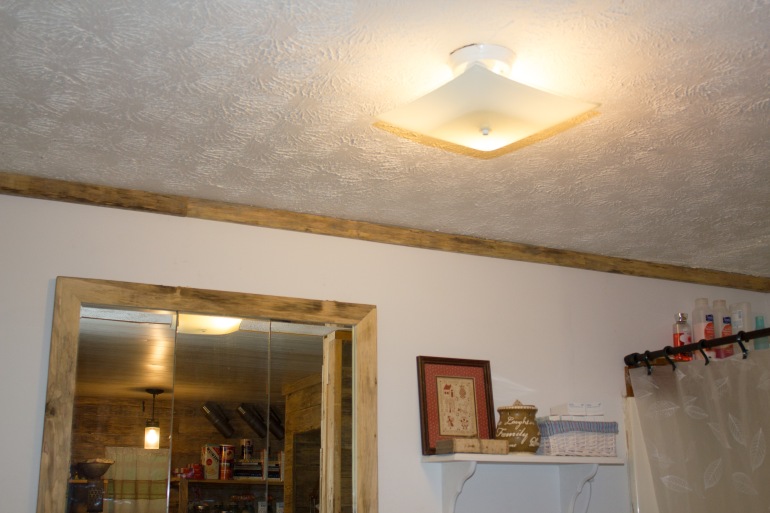 and notice the nasty fan is GONE!  We reused one of the old fixtures we took down from the mudroom (we used the whitest one we had).

I kept the galvanized bucket we were previously using as a trash can and we no longer have to shower with the towels!

I didn’t show a ‘before’ photo of the vanity but it had something in a few spots that just would not come off no matter what I used to try and remove it.  So, my answer was to get my trusty sandpaper out and sand it off!  It also gave the vanity a more distressed look and since there was white paint underneath the green I thought it tied in nicely with the new white walls.  And, the un-cleanable gunk is gone!

I also kept the apple basket we were using to hold the extra toilet paper.

I’m sure you noticed the three different types of flooring.  Yes, this disturbs me but will have to be something I turn a blind eye on for now.  See, we have to redo the subfloor.  It’s currently 1/2″ plywood with a 1/4″ sheet on top.  The installers did not do the previous owner right and she was none the wiser.  We could tell it wasn’t 3/4″ just by walking on it (lots of give in some places if you know what I mean).  But, I digress… when the time comes and we can seriously tackle this room then we will completely remove the floor, add 3/4″ plywood then continue the wood-look vinyl that is in the pantry and laundry nook into the bathroom.

What are our plans for this bathroom you ask?  Well, we have a cast-iron claw foot tub that was on the property (but outside and in rough shape) that we want to have re-glazed and brought back to its original splendor.  We have an old kitchen sink with a wall-mounted faucet that was also on the property that we intend to use.  (That one is in decent shape and shouldn’t take much to make it shine again.)  We will custom build the vanity for it.  We will buy a new toilet and we will change the floor plan.  Easy-peasy!  (See why we need more m&m’s, hahaha!)  So, that is why I will turn a blind eye to the flooring until we can seriously tackle this bathroom.

And, for now, I intend to leave this wall blank.

I had fun looking around the house to find things I already had to decorate the bathroom.  I wanted simple yet farm and vintage related things… 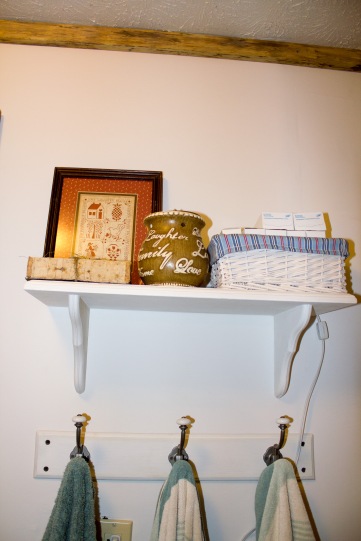 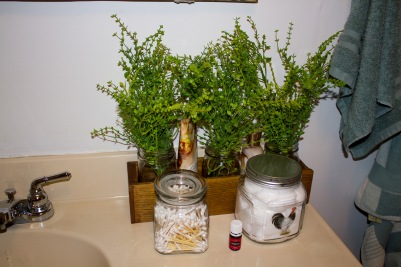 I think I found a few!

CountryBoy has plans to build a temporary wall by the toilet; one that is easily removed when the time comes to tackle the bathroom but for now…

I moved my ‘linen closet’ over there!  This somewhat separates the bathroom from the pantry and will work until winter time then it will have to be moved as it stands in front of the gas wall heater.

I thought I was going to get by with a $15 dollar bathroom project but after washing our vinyl shower liner, the piece that reinforces the liner holes came off.  After several showers, the liner was barely hanging on as many of the holes had torn.  I wanted a fabric liner and found one on sale for less than $10.  Yay! 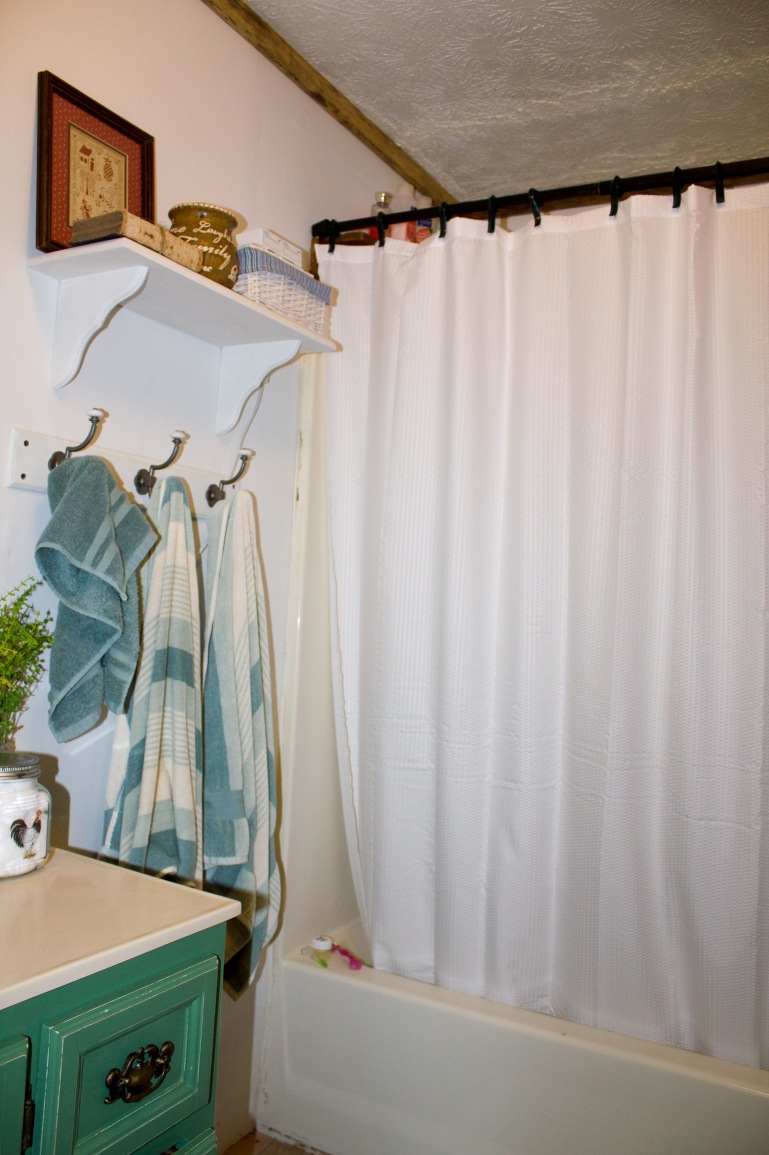 One last before and after… 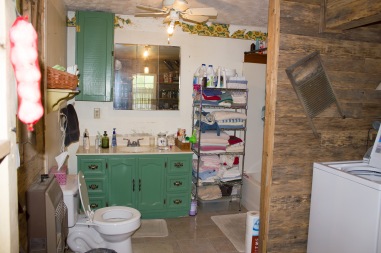 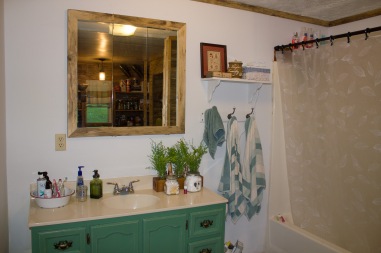 So, there ya have it…  for less than $25, my not-so-simple but cheap bathroom project!