After moving into the farmhouse we decided, rather quickly, to completely gut the kitchen.  Had we known that in a few weeks we would have a massive snow storm we might’ve considered waiting a bit but, that’s neither here nor there.  We gutted it clear to the exterior wall exposing the house to some very chilly temperatures.

During the demo process we removed the drywall and discovered layer upon layer of wallpaper and even some newspaper covering the rough cut wood walls.

We saved a section of them knowing we wanted to display them somehow.

When I was in Florida back in January I had purchased a shadowbox that was 50% off and it has been taking up floor space in the pantry ever since.

The weather today is cold with snow flurries off and on.  Not a good day to be working outdoors if one doesn’t have to.  So, it seemed like a good day to finally do something with the ancient wallpaper.

CountryBoy took on this project and enjoyed sifting through the layers and creating the display. 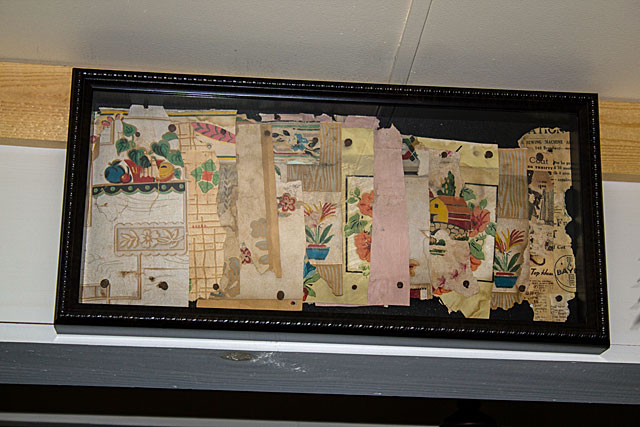 Fourteen layers!  The newest is on the left with the oldest, the newsprint, on the right.  He even used the original tacks which were used to hang the wallpaper.  (Yes, we saved a bunch of those, too!) 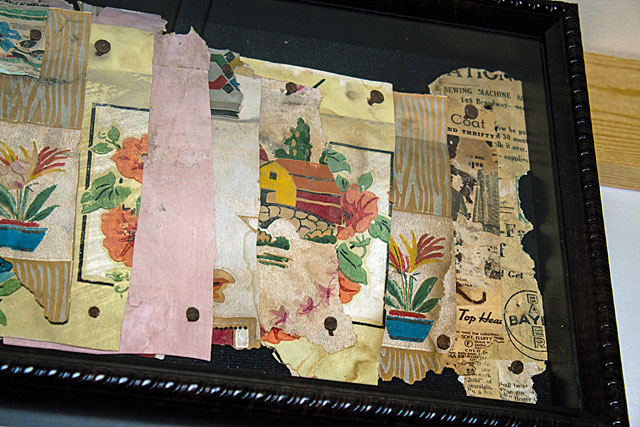 I’m happy we kept it and now some of the history of the farmhouse kitchen is on display.

A couple of weeks ago I started a seed germination test on beefsteak & roma tomatoes, green peppers and jalapeno seeds.

The green pepper seeds did nothing and appeared to be molding up so I tossed them and all the seeds as well.  Who knows how old they were.  They were some I had saved a few years back, so, not a huge loss but disappointing nonetheless.  I started another germination test using some seeds I saved a few weeks ago from a pepper I used.  We’ll see how they do and if nothing then I’ll buy a pack of seeds.

The jalapeno seeds also did nothing but they were not moldy so I will let them go a bit longer.  We’ve not had very many sunny days so that may be part of the germination problem.

Both the beefsteak and roma tomato seeds did well with 7 out of 10 seeds sprouting with nice roots. 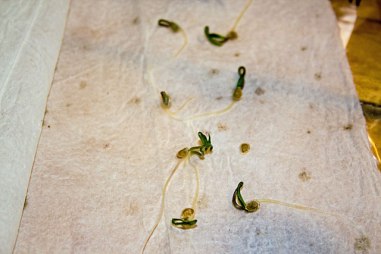 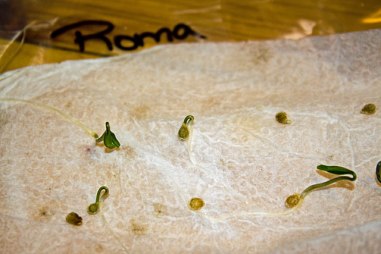 I went ahead and planted all of them since the remaining seeds appeared to have a root starting to emerge from the seed.  If those seeds end up sprouting then I will have a germination rate of 100% of the tomato seeds.  Currently, the germination rate is 70% which is pretty good.  The beefsteak seeds were purchased last year and the roma’s are from seeds I saved and are, at least, over a year old so I’m happy they did so well.  If the rate remains at 70% I will simply start a few extra seeds to make up for the ones that may not germinate.

CountryBoy saw where someone had used toilet paper tubes to start their seeds in then you simply put the tube in the ground when ready.  Sounds easy enough so we’ve been saving them.

I put ten tubes each in two shoebox size plastic totes, added seed starter soil and placed the tiny sprouts one per tube. 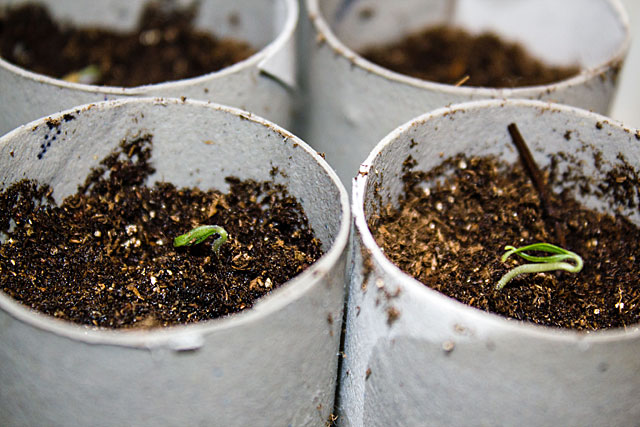 I think they’re happy to be out of the cramped quarters of the paper towel and baggy!

Now if we could get some sunshiny days to help these guys along.

Have you started any seeds yet?  Are you planning on it?  If so, what are your garden plans this year?  I’d love to hear about it!