So far, this winter has proven to be very similar to last winter even though the folks ’round here keep telling us that this is not typical of winters in these parts of Kentucky.   Cold weather – yes; a couple inches of snow – yes, but not a FOOT or more of snow!  We moved here from Florida so I’m pretty sure we can’t be blamed for ‘bringing it with us’, ha!

Although the weather may be similar our preparedness is vastly different this year than last.

We had only moved in two short weeks before the first snow fall.  Talk about two Floridians unprepared for a foot or more of snow, yea, that was us! 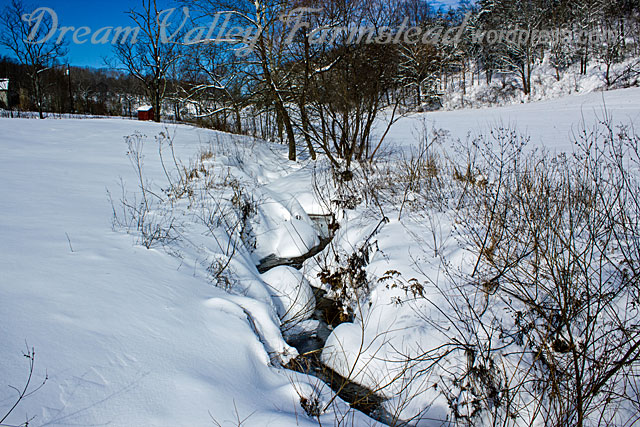 Last winter we were on pins and needles wondering about the water freezing and pipes bursting since it happened on several occasions.

This winter we were sailing along fairly well.  We were warmer (of course I spend most of my time in front of the fireplace or upstairs in the sewing room where it’s warmer as the rest of the house is still cold – not the see-your-breath kind of cold like last year but still cold); the house is warmer, overall, which helps keep any pipes from freezing even in single digit temperatures.  So, we started to relax about possible winter water issues when it happened.  We had a night of below zero temps and woke up to frozen pipes.  sigh.  I had been lax about filtering the water and filling our water dispenser since it seemed we weren’t going to have any issues.  THANKFULLY, I had prepared the coffee pot the night before so we were, at least, able to have our morning cuppa coffee before having to deal with the issue.  And, we had some water in the cistern so we were able to flush the toilet.

Long story short, the water had frozen outside where the water line enters the house.  It thawed and all was well.  CountryBoy is going to thoroughly insulate the current poorly insulated box and hopefully, that will keep it from freezing.  And, we spent the rest of the day filtering water and filling up our water dispenser and all of the animal’s waterers.  You know, just in case!

But, this morning, we woke up to a busted line behind the kitchen sink where it is next to impossible to access the water lines.  sigh.

Again, we had our coffee, a few tears were shed then CountryBoy came up with the solution of re-routing the lines and abandoning the lines in the wall.

The re-routing of plumbing is complete and drying.  Here’s hoping that solves any future freezing water issues.  Well, that and insulating the metal box that covers where the water line enters the house.

Another challenge with this much snow is getting out of our driveway.  Thankfully, a neighbor came by the other night and scraped it the best he could.  We were extremely grateful since CountryBoy had a doctor’s appointment this morning.  After several attempts in 4-wheel drive, we made it to the road and to the appointment.  From there we went to Lowe’s to purchase the necessary plumbing needed to re-route the water lines in the kitchen.  Course, I had him drop me off at Hobby Lobby so I could get some sewing paraphernalia (wink!).

It’s also been a challenge for the poor chickens.  They have had no desire to investigate the white stuff and have stayed in their coop even though their door is opened every day.  CountryBoy shoveled paths to the coop, the wood shed and the tool shed to make it easier for us to get back and forth.

I have given them homemade suet cakes to occupy and nourish them but without them leaving the coop they were unable to get their daily and necessary dust baths.  So, I took a metal tray that had been left by the previous owner from the barn and filled it with some loose dirt and mixed cool ashes from the fireplace in it and put it in the coop .  Before I even had it all mixed up a few of the girls were checking it out.  It didn’t take them long to start scratching in it and eventually taking their ‘baths’.

This afternoon, the paths that CountryBoy shoveled were beginning to melt so I carried the girls, two by two, out to where there was some grass.  They were thrilled to be out of the coop!

They spent the afternoon traveling up and down the paths, eating grass, drinking melted snow and a few even ventured down the still-snowy driveway a bit towards the barn.  Here they are heading back down the path from the wood shed…

Instead of having all my ducks in a row apparently I have all my chickens in a row, haha!

Do you see the metal box beside the blue coffee canister?  That’s where the water line enters the house and the box had very little insulation in it when CountryBoy opened it up yesterday.  That’s the culprit.  sigh.

Most folks are afraid of losing electricity in storms such as we had but our biggest fear is loss of access to water.  We can survive without electricity, thanks to wood and gas heaters, but we can’t survive without water for very long.  Water is essential for the animals as well as for many of our needs.  We have also made many preparations for survival without electricity, such as, being able to cook with a wood-burning fireplace as well as warmth from it; oil lamps in every room and a supply of lamp oil; and for me, lots of books to read!  But, water?  We can’t do without it for very long so we will do whatever we can to avoid being without for very long and/or be prepared just in case.

Temperatures are supposed to be warmer this week with some rain so maybe most of the white stuff will disappear and the girls can get back to their routine.  In fact, maybe we can ALL get back to our routine, dog and cats included ;).

Apparently, this amount of snow (that was cleared by our neighbor) is OK for LizzieBelle!  More than that?  No way!

How ’bout you?  Were you in the midst of the Snowpocalypse?  What preparations have you done for those ‘just in case’ moments?  I’d love to hear them – it may be something we need to think about and/or do.